The tent worked very well this year - we had our accommodation module, 'Saddams Palace', the main white consular office and the blue gazebo acting as a vestibule, 'Assad's Gazebo'.

It was universally agreed we should continue to name our tents after despots - suggestions for future expansion include something attributed to “Gadaffi”, a chemical toilet named “Chemical Ali's Throne” and maybe we'll have an “SNP Collaboration Office” in future too.

Additions to the tent included:

We might want to move away from having Nordin's tent, “Saddam's Palace” - we're maybe causing unnecessary wear and tear to it. To be discussed with Nordin.

The whiteboard was popular this year - Doc0cassi wrote different statements on it each day, and we could talk to people who'd stopped to ponder what was being claimed!

The whiteboard system will have to be refined and taken to Congress/future events. 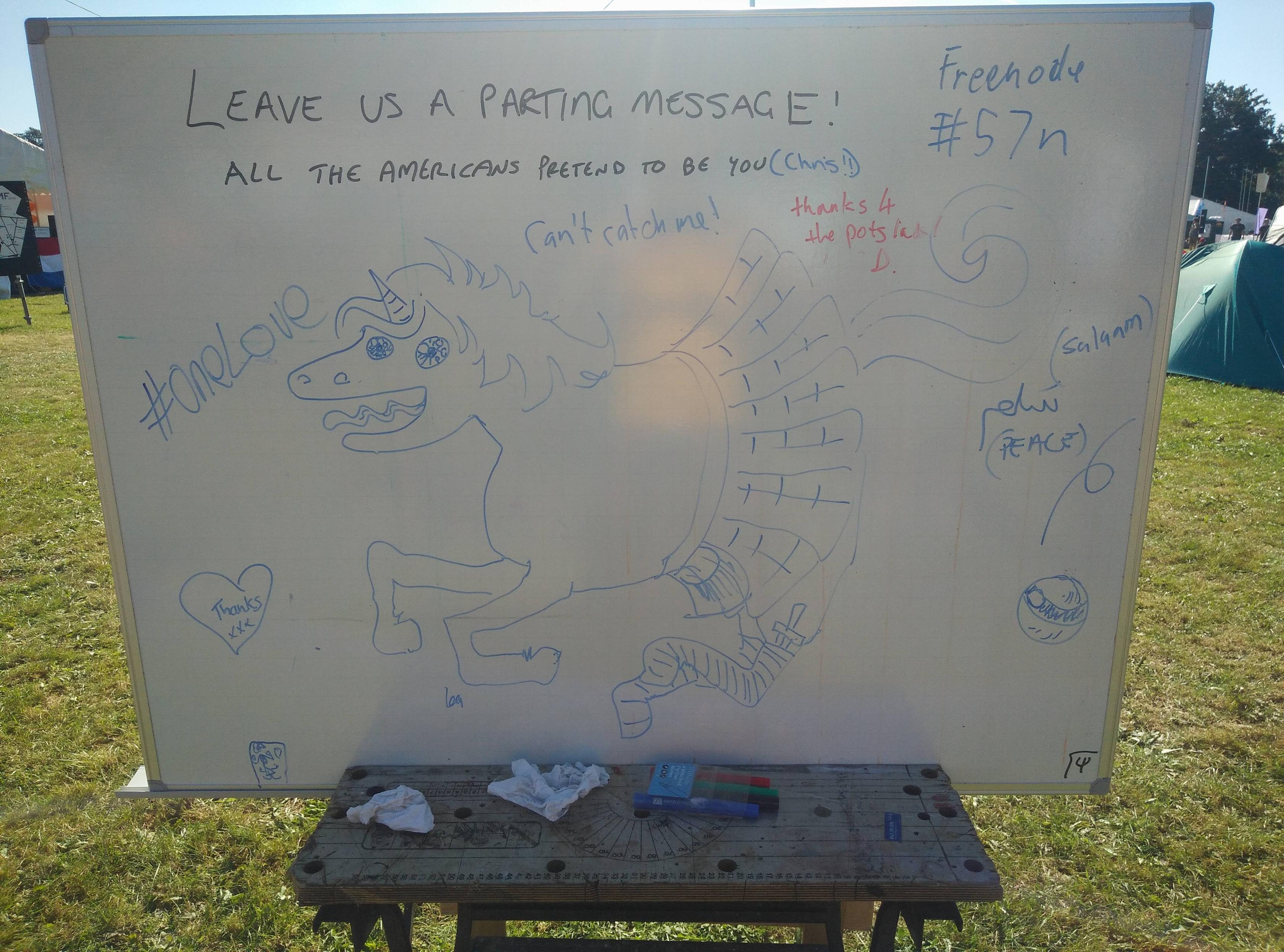 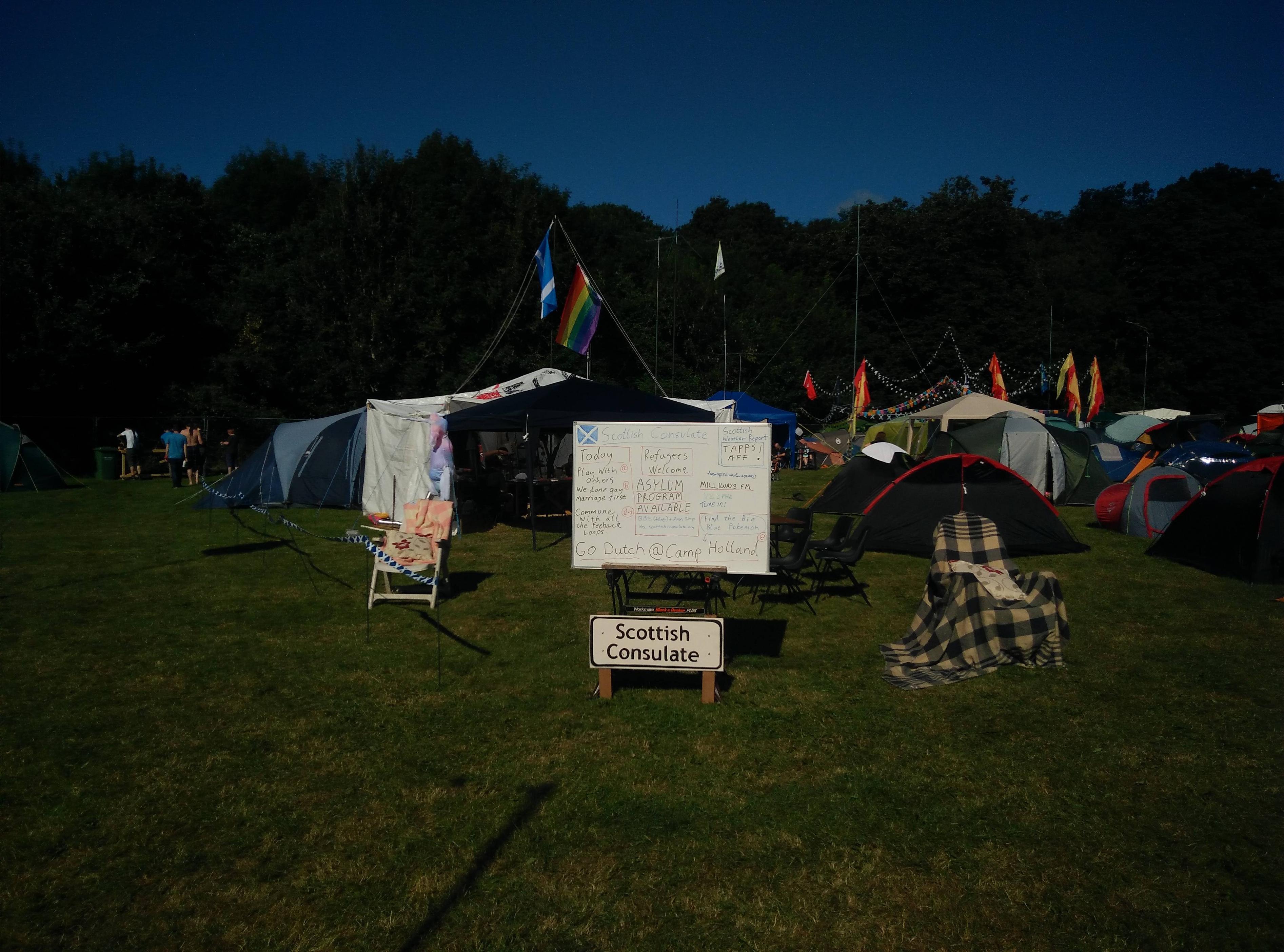 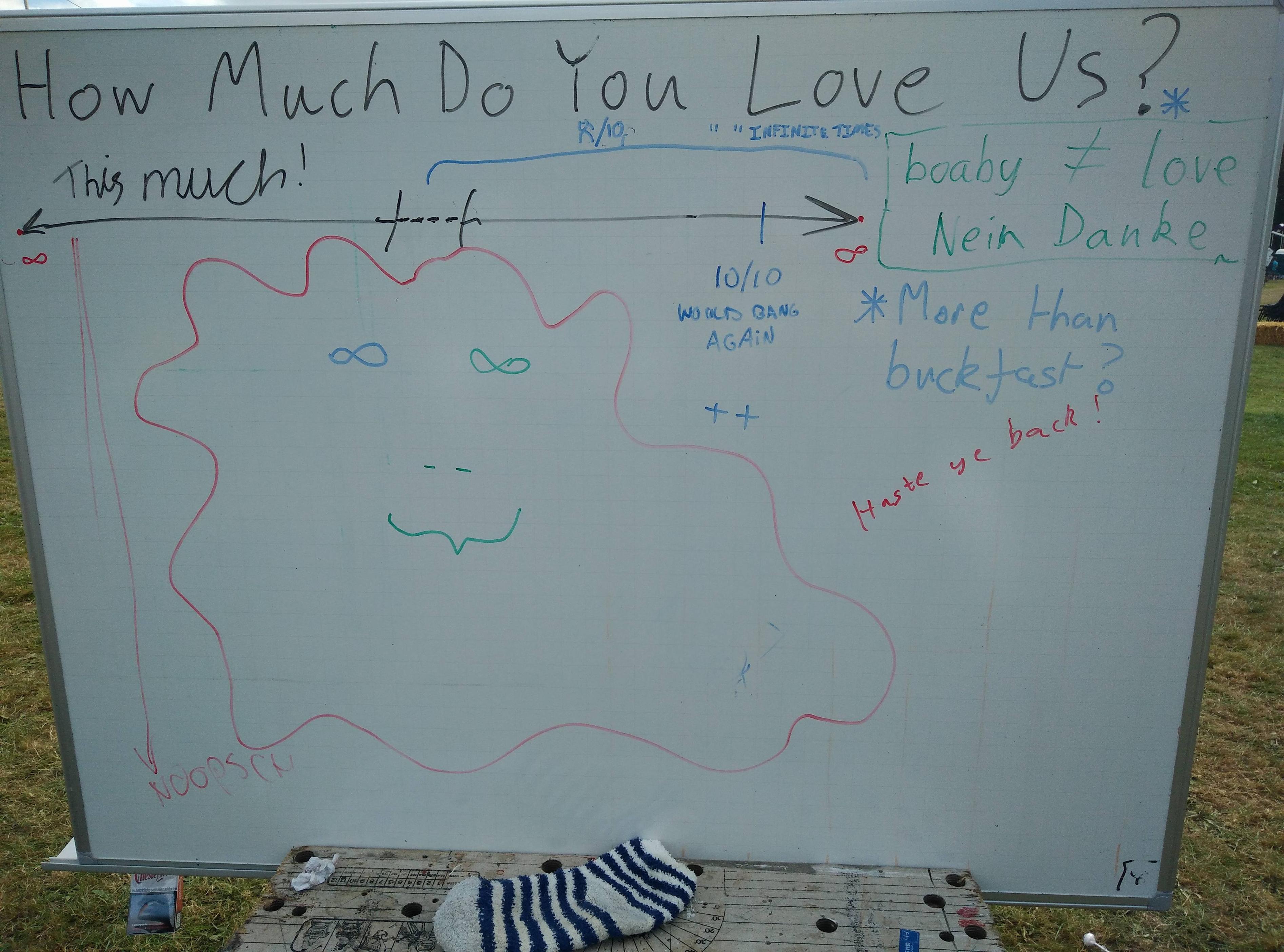 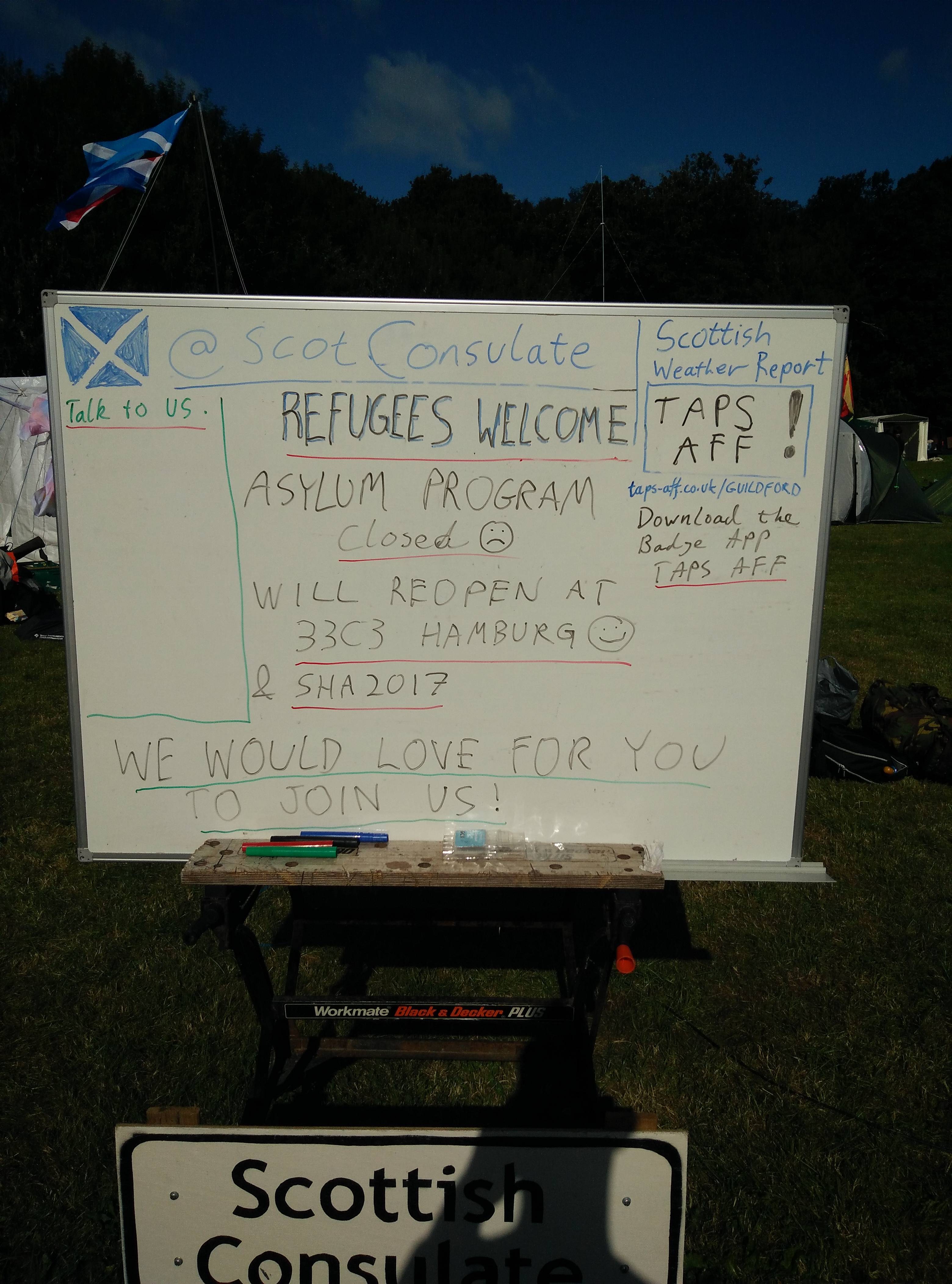 THE ROADSIGN WAS AMAZING. This is all. 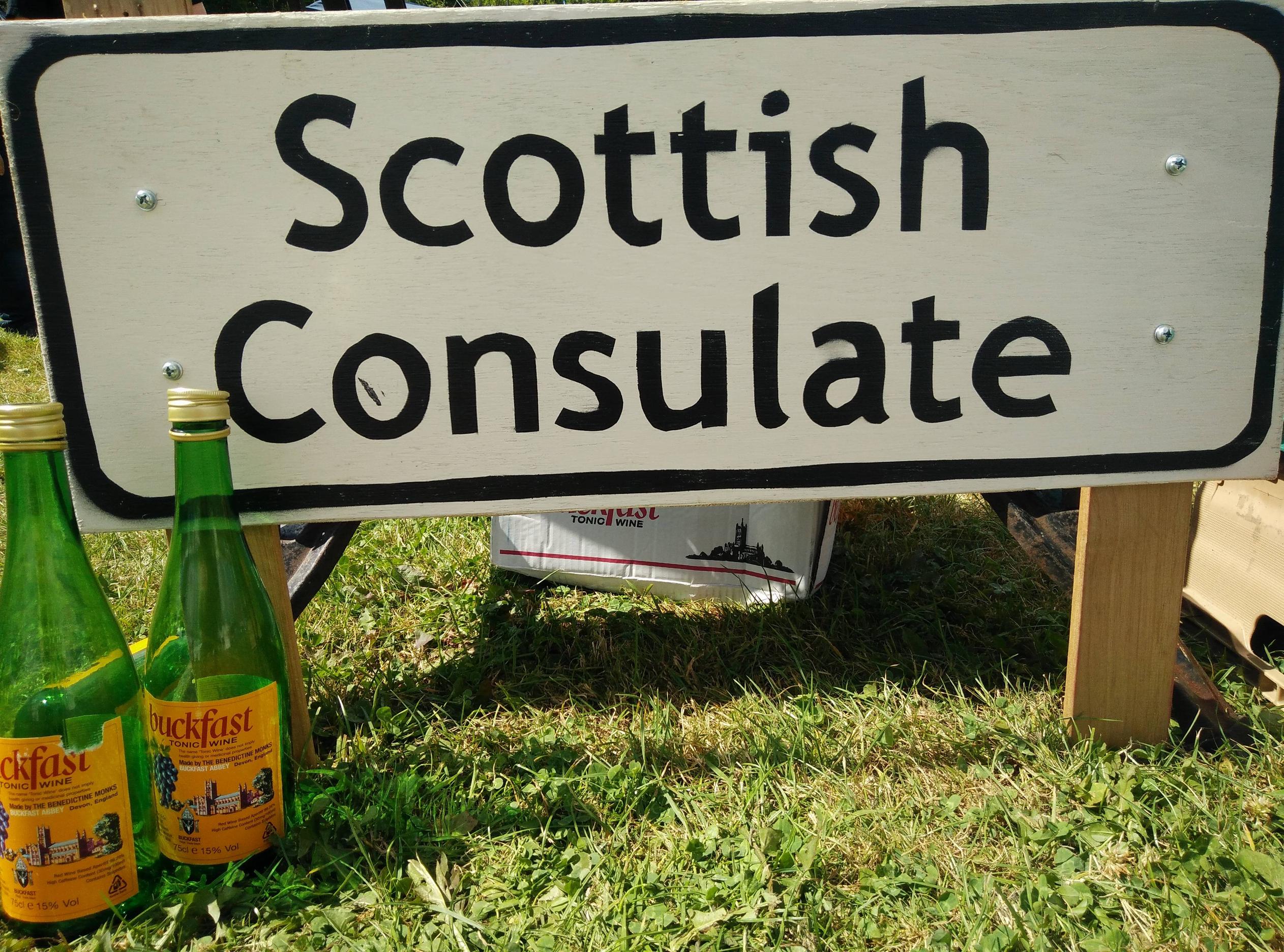 The asylum program went so well this year.

People from all over came by to get their certificate of True Scotsmanship. It proved a great introduction and talking point, and people responded well to it.

These were, overall good! Let's be more organised next time maybe

As ever, Whiskyleaks went well. Carnage ensued, our scottish accents were appreciated.

The Dutch didn't appreciate us turning up in their camp with Buckfast too much.

We ended up going to Milliways and being awake until daytime. Whoops.

This was super chill. Cool people came over and we talked politics, hacking, tech and life until the party was shut down by the neighbours at 4am.

This needs work. Hibby needs to think about this concept some more.

WSPR gave a great talk on the reverse engineering of dangerous goods. He wins the prize for being the first of us to give a proper, organised talk. Well done.

And here is WSPR with his long tube exploding toy shindig: